A Tale of Two Cities

There is no doubt about it: the pandemic is intensifying inequality across the world. We first witnessed this widening gulf regarding work, when certain jobs were deemed “essential”. While white-collar workers transitioned to the home office, essential workers had to grind in conditions that put them at heightened risk of contracting the virus. Another reckoning is coming: when governments start distributing vaccines, each and every person will know their place in the world. That’s if they don’t know it already, and outside of employment, one area that highlights it better than any other is the housing sector.

It was the worst of times

When the going got tough, the rich got going. We saw this in big cities across the world. Rather than face lockdown in crowded streets, people with enough means fled. New York City was the first real COVID epicentre in the United States. As businesses began to shutter and the writing on the wall became increasingly clear, residents of the wealthier zip codes vacated the city. Where did they go? Many started their summers early by heading to the Hamptons, where much of New York’s wealthiest spends their summers. Whereas New York City is cramped with crowded streets, the Hamptons are known for the sprawling beach houses and open air. The map below by the New York Times illustrates how the exodus occurred in the Northeast¹: 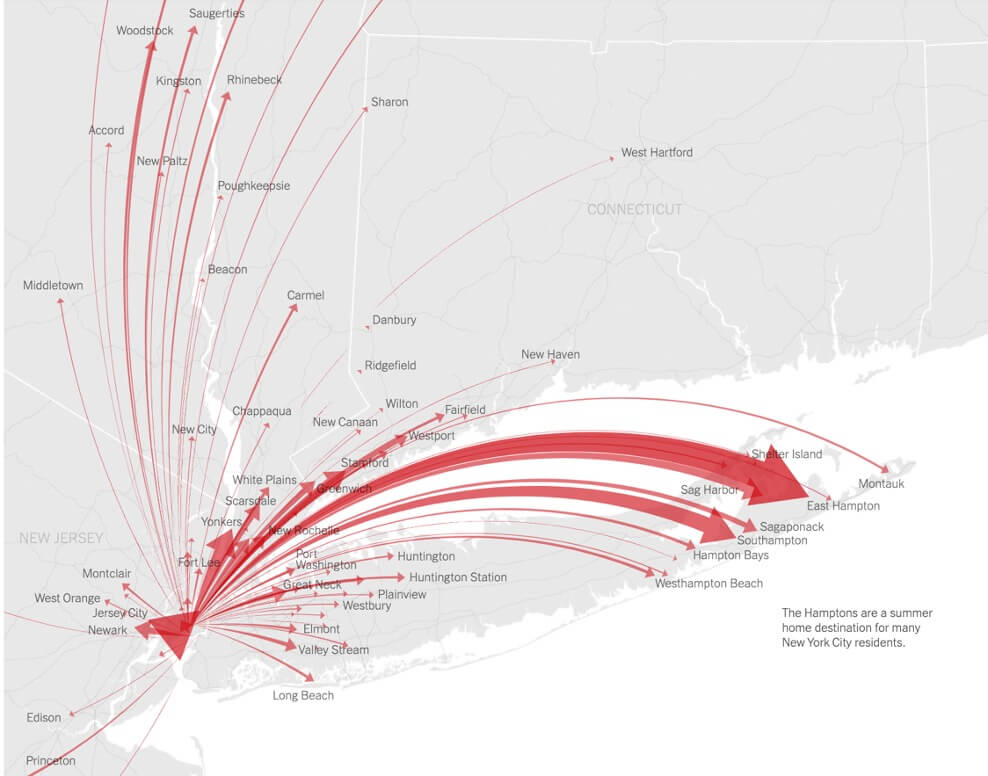 Outside the Northeast, the cities that received the largest influxes of New Yorkers were Miami and Los Angeles. 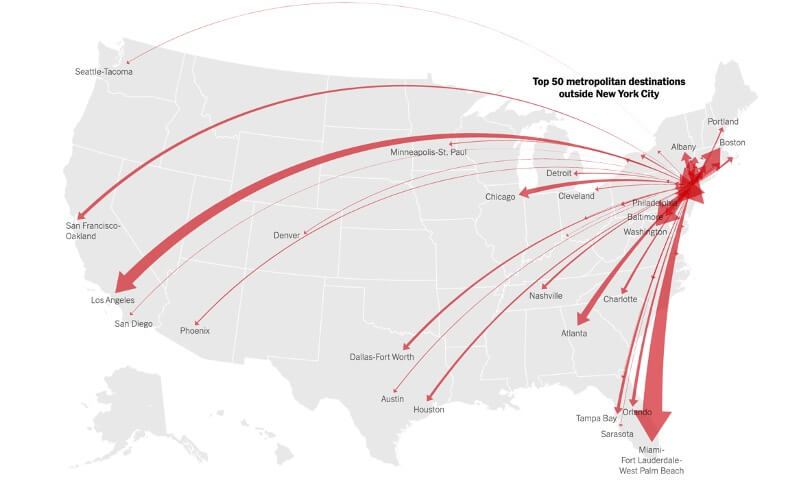 New Yorkers without the means to travel away from the city were not so lucky. They had to endure what were, at the time, the strictest lockdown conditions in the country. Although the city’s famously busy avenues were eerily empty, the City did not feel especially hospitable, especially when civil unrest began. After the death of George Floyd in Minneapolis, an estimated 450 NYC businesses were looted or damaged between 29 May 29 and 9 June². It is understandable, then, why many residents felt the need to find alternative living arrangements; it’s just that few could afford such a luxury.

It was the best of times

Some New Yorkers ended up in Aspen, Colorado. Aspen is famous for its picturesque ski slopes, so it is also a typical vacation locale for America’s richest. Like many places, real estate transactions in Aspen came to a grinding halt at the beginning of the pandemic³. A few months later, however, the market exploded for two reasons. The first reason was pent-up demand: the pandemic caused many would-be transactions to pump the brakes, and many houses that were on the market at that time took themselves off of it. This is only logical, as March and April 2020 were riddled with uncertainty, so it was not an ideal time to move. The second reason had to do with the influx of the “city slickers”, that is, people relocating from big, crowded cities like NYC and San Francisco. As time wore on, and it became clearer that the only solution for COVID in the US would be a vaccine, more and more people began seeking long-term living solutions. Moreover, since most wealthy people have jobs that can be performed from home, irrespective of where home is, places like Aspen seemed like an ideal place. The 546 million USD’s worth of property transactions that took place in August was an all-time record. September’s transactions were also record-breaking. Other ritzy ski resort towns across Colorado also saw similar property value increases.

A YEAR AGO: The magnet that repels, tolerably

The Death of FTX

On the Lips of CEOs