They say that hindsight is 2020. Since it is already 2021, we now have the benefit of hindsight when we look back at the year that will forever be associated with COVID. Some companies fell apart. Others flourished. Enough time has passed to start drawing initial conclusions about how the business world has changed since the onset of the COVID crisis. This analysis covers one of the companies that benefited most from the worldwide lockdowns: Netflix.

Many people worldwide credit the company’s streaming service for helping them get through the pandemic with their sanity intact, but its prospects did not always look so bright. Netflix started in 1997 as a DVD rental service that sought to take on the status quo of home video rental, which at that time meant Blockbuster. Its founders have several stories about the company’s true origins — including one about 40 USD in Blockbuster late fees — but the gist is that two successful Silicon Valley entrepreneurs decided to take on the home video rental market in the late ‘90s. After all, their success was not overnight; DVD players were still prohibitively expensive for many consumers until the early 2000s.

The company had to weather several early setbacks, primarily the bursting of the dot-com bubble and the September 11th attacks. Despite these challenges, the company’s subscription-based DVD rental service grew more and more popular as the decade went on. By 2010, Netflix was the fastest-growing customer of the US Postal Service. But during that time, the company has also introduced its video on demand (streaming) service, which made them the largest source of Internet streaming traffic each evening. As of Q1 2020 (when the COVID crisis started), the company boasted over 182 million global subscribers.

In a recent Stage article, we wrote: “Perhaps no industry was hit harder by COVID than the travel industry”. And perhaps no industry benefited more from COVID than the video streaming industry. We are used to it by now, but the lockdown, the closed borders, and the restrictions on everyday life went into force quite quickly in most countries. Suddenly faced with the prospect of spending all day, every day at home, people naturally turned to find ways to distract themselves from the doom and gloom of the virus. Between Q1 and Q2 2020, Netflix gained over ten million subscribers. The company’s stock, in turn, had a banner year, as we can see below: 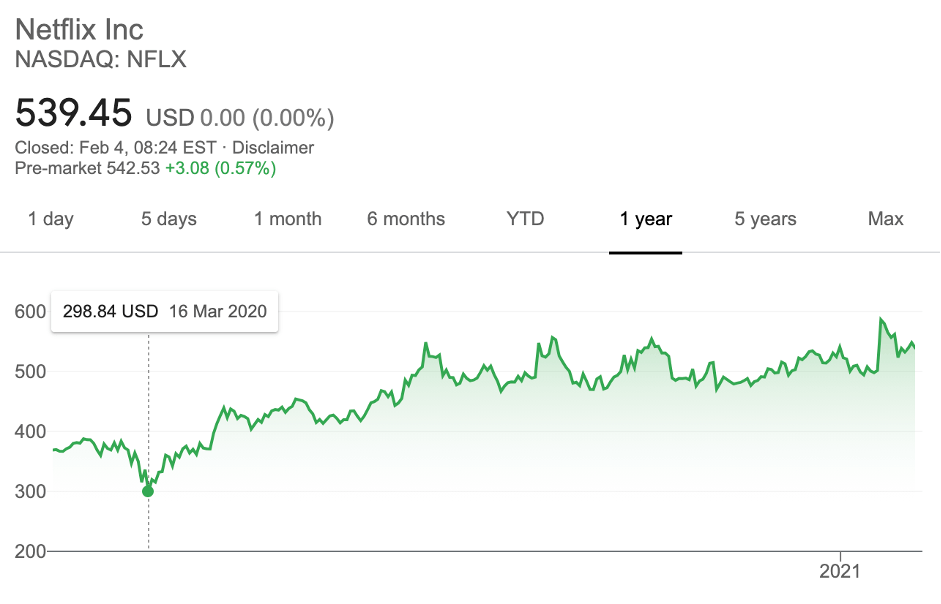 But just because Netflix performed well over the last year does not mean that it did not struggle. Primarily, Netflix has faced increasing competition over the years from partners that became competitors. For example, in 2012, Disney and Netflix signed a nine-figure deal that allowed Netflix to carry new Disney movies, but in August 2017, Disney announced that it would be pulling all its titles from Netflix by 1 January 2020. This pull date was timed to correspond with the launch of Disney+, the company’s proprietary streaming platform. And Disney has not been the only company to pull its content in order to launch its own streaming service; it seems that just about every significant content creator is trying to get in on the streaming game. As of December 2021, Disney had already amassed over 86.8 million subscribers.

HOW DID NETFLIX’S STRATEGY CHANGE DURING COVID?

Netflix’s strategy did not necessarily change during COVID; it just became far more set in stone. Over the years, Netflix stopped relying entirely on other content creators and started to create its own content. The company’s first self-made hit came in the form of House of Cards, which was commercially and critically successful TV show. In 2015, Netflix released only 304 hours of original content on its platform. By 2019, this number rose to 2,769 hours. There has been much discussion about the decline in the quality of Netflix’s programming, and that decline is quite logical. After all, not every film can be prestige TV or an arthouse film. This original content strategy, despite its criticism, seems to have been proven correct by the market. With so many broadcast companies pulling their content from Netflix in order to launch their own streaming platforms, it was only a matter of time before clients stopped subscribing to a platform without good content. Netflix spent over 17.3 billion on content in 2020, and most of that was on original content. This trend of heavy spending is projected to continue, and it has been made all the more necessary since 2020 was mostly a lost year in terms of TV and film production.

The second, related strategic change had to do with the international nature of the company. Netflix started in California, but it has grown into a global powerhouse. Netflix streaming is now available in just about every country on the planet to 203 million subscribers; it has even managed to get its foot in the door of the ever-elusive China, which has a notoriously strict media landscape. As such, Netflix is producing or securing the rights to far more international content. To stay on top of the streaming game, Netflix will need to continue its heavy investment in international growth.

NBCUniversal’s Peacock and HBO Max, two of the latest upstart competitors, are burning through obscene amounts of money to chase Netflix’s star. NBCUniversal’s CEO tried to emphasise its 33 million signups, but admitted that the young venture would lose 2 billion USD in 2020 and 2021. WarnerMedia, which owns HBO Max, projected that it would also have over 2 billion USD in expenses related to launching the streaming platform. While its competitors struggle, Netflix has finally become the force that many expected it to be. In 2014, Netflix made history by becoming the first online-only studio to receive a Golden Globe nomination. Just a few days ago, Netflix received a whopping 42 nominations for the 2021 Golden Globes, far more than any other studio. They seem to be doing just fine.

Water Polo in Budapest and a Wimbledon marked by absences