They say that hindsight is 2020. Since it is already 2021, we now have the benefit of hindsight when we look back at the year that will forever be associated with COVID. Some companies fell apart. Others flourished. Enough time has passed to start drawing initial conclusions about how the business world has changed since the onset of the COVID crisis. One company whose recent success might surprise you is the luxury conglomerate Moët Hennessy Louis Vuitton, better known as LVMH.

Even if you haven’t heard of LVMH, you have undoubtedly heard of several of its brands. The company is not a traditional company in the sense that it did not follow a linear path to eminence, but rather, it came to be after a series of non-traditional mergers. Its first major merger occurred in 1971 between Moët & Chandon, a champagne producer, and Hennessy, a cognac producer. While cognac and champagne production are not exactly the same, they still exist in the same wine/spirits industry. The next merger, however, pushed the company in entirely new directions. In 1987, Moët Hennessy merged with Louis Vuitton, the celebrated Parisian fashion house. This merger epitomises the approach that LVMH has taken in the subsequent three decades: pure luxury, no matter the industry. The conglomerate now controls over 75 prestigious brands divided into six main branches: Fashion, Wines/Spirits, Perfumes/Cosmetics, Watches/Jewellery, Retail, and Other Activities (yachts and hotels). Some of their most famous brands include Veuve Clicquot, Belvedere, Chandon, Christian Dior, Fendi, Givenchy, Marc Jacobs, Guerlain, Acqua di Parma, Bulgari, Tag Heuer, Le Bon Marché, and Sephora. Even if you are not the type who spends their money on luxury products, you will see most of these brands if you ever step foot in an airport’s duty-free shop.

Today, LVMH has the highest market cap (266 billion USD) of any French company.

HOW DID COVID IMPACT THE LVMH?

Many expected luxury brands to suffer the most when the pandemic hit. This belief was logical, after all. What is the first thing that most households cut when they need to tighten their belts? Discretionary spending, of course. The problem with this logic is that it assumes all people behave the same way, but premium purchasers do not behave like mass-market purchasers. The Great Recession took only 9 per cent off the size of the personal luxury goods market according to Bain & Co, which, in terms of that recession, means the industry came away relatively unscathed. Importantly, LVMH did not lose much during the Great Recession; its sales stagnated for a period, but eventually rebounded due to increased spending from China. In fact, many of the “heritage brands” — brands that are older, well-established, and trusted — performed well during this period, even though the market overall took a hit. LVMH is made up almost entirely of such heritage brands. Thus, even though we equate LVMH with the luxury market, they do not necessarily follow the same trends because of LVMH’s luxury-heritage sub-category.

Let’s take a look at LVMH’s stock market performance over the last year to see evidence of COVID’s impact: 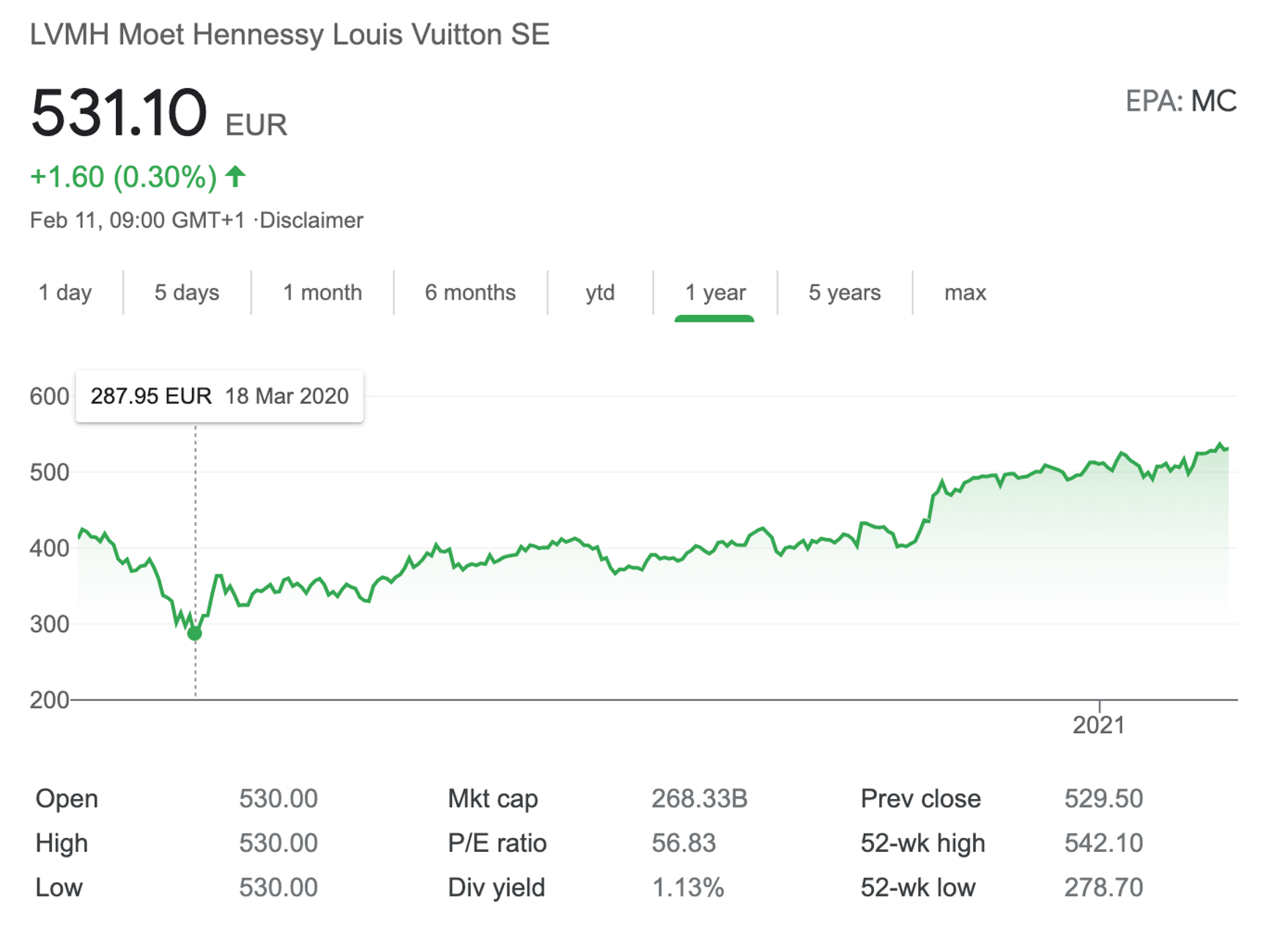 Like many companies, LVMH’s stock hit its annual low last year on the 18th of March. Since then, however, the company’s stock has rebounded and reached an all-time high. In fact, its stock is 28% higher than it was at this point last year, a few weeks before the realities of the pandemic panic set in across the globe. According to LVMH, they were able to weather the COVID storm thanks largely to an excellent performance in China.

HOW DID LVMH’S STRATEGY CHANGE DURING COVID?

This topic is a little bit harder to dissect when it comes to a mega-conglomerate like LVMH. They are by no means a monolith, and their brands do not all behave in one form or fashion. Indeed, since they existed in different industries, each brand faced a different set of trials and tribulations brought on by the pandemic. One such brand, Kendo, which is the beauty incubator behind many of the brands sold at Sephora retail locations, had to lay off 10% of its workforce back in June. Moreover, it was recently announced that Fenty, the new fashion house launched in partnership with Rihanna, would be taking a “pause” until market conditions improve. The public does not yet know what a pause means, exactly, but suffice it to say that it is not good news. But there was some good news, LVMH also reporting that it would be backing Rihanna’s Savage x Fenty lingerie line with over 115 million USD in new funding. This development goes to show just how disparate the impacts are, even within the same sub-industry. Rihanna’s high-fashion line hit a massive snag, while her lingerie line saw explosive growth.

Many of LVMH’s brands have been around for hundreds of years, and the company has successfully weathered every financial storm. Part of this is due to their flexibility and constant expansion and experimentation. They define what luxury is, they do not let the market define them. Overall, their sector has not taken the hit that many might have expected, and their financial position is far superior to what one would have thought back in April 2020. Will we see the world’s most dominant luxury company become even more prevalent in the next few years? The stock market seems to think so.