It costs a lot to exist these days

In September of 2020, the cost of sending a shipping container was four times less expensive than it was in September of 2021. Logistics experts warned early on that there would be cost increases due to the pandemic, but a 12-month quadrupling of price? Few expected that. These supply-chain problems have been especially pronounced in certain areas. For example, according to The Economist’s Worldwide Cost of Living Survey, Tel Aviv became the costliest place to live on Earth in 2021. Israel’s geographical and geopolitical challenges partly drive such a high Cost of Living (COL); they do not have easy access to nearby nations for free, open markets like Mercosur, NAFTA, or the EU. With shipping costs at all-time peaks, alcohol, groceries, and transport prices have risen dramatically enough to drive the city’s COL to unprecedented levels. But according to The Economist, much of this increase had to do with a strong shekel (Israel’s currency). The currency performed especially well against the US dollar due to its successful COVID-19 vaccination campaign and a locale that has been attractive to foreign technology investors. That said, this data was collected in August and September 2021, meaning the country’s recent decision to keep all foreigners out due to the Omicron variant might have long-term effects on foreign investment.

Stepping back from Tel Aviv, The Economist’s data shows a 3.5% year-over-year increase in global prices in local-currency terms. This is after a 1.9% increase in 2020 and 2.8% in 2019. Below is a graph showing COL in major cities across the globe as of September 2021. 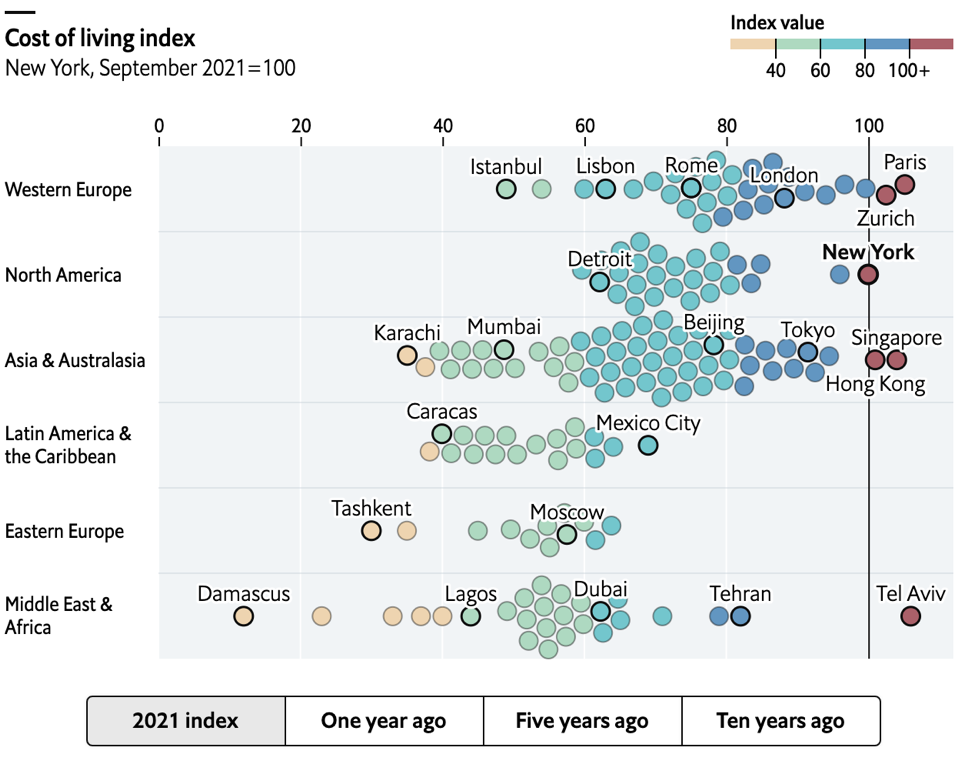 Besides Tel Aviv, there are some other notable highlights. Not all cities saw their costs of living increase, especially relative to other cities. For example, Rome fell 16 places in the rankings, from 32nd to 48th, because of drastic decreases in costs for groceries, household goods, and clothing. Tehran has shot up the rankings, but for all the wrong reasons: reimposed US sanctions against the nation have led to continued shortages of goods and increased import prices. Besides Tel Aviv, the other cities that are more expensive than New York are Paris, Singapore, Zurich, and Hong Kong.

At a goods level, category matters. Oil prices have risen around the globe, which has caused a 21% increase in transport costs. Tobacco prices have also risen precipitously, with prices rising 6.7% on average. Food, in general, has not risen all that much, and the cost of a bottle of beer around the world has not changed much since 2020.

A fascinating part of these rankings and the associated graphs is how especially volatile they seem today, which is a direct effect of COVID. Before, major shifts in rankings could only be precipitated by issues like hyperinflation (Venezuela), or the imposition of sanctions by world powers (Iran). Otherwise, significant shifts simply did not happen in short periods; they were always the result of long-term economic trends and policy shifts. Nowadays, however, COL is far more volatile because COVID can swoop in and change a country’s economy overnight.