If you are getting the feeling that everything has gotten more expensive lately, you are not alone. Inflation is increasing rapidly across the globe. Take, for example, the United States, where the Consumer Price Index (CPI) rose 6.2 per cent in October, which is the sharpest increase since 1990. Investopedia defines the CPI as “the most widely used measure of inflation… the CPI examines the weighted average of prices of a basket of consumer goods and services, such as transportation, food, and medical care…Changes in the CPI are used to assess price changes associated with the cost of living”. To put this 6.2 per cent into context, the New York Times has a graph showing monthly inflation over the last 20 years. 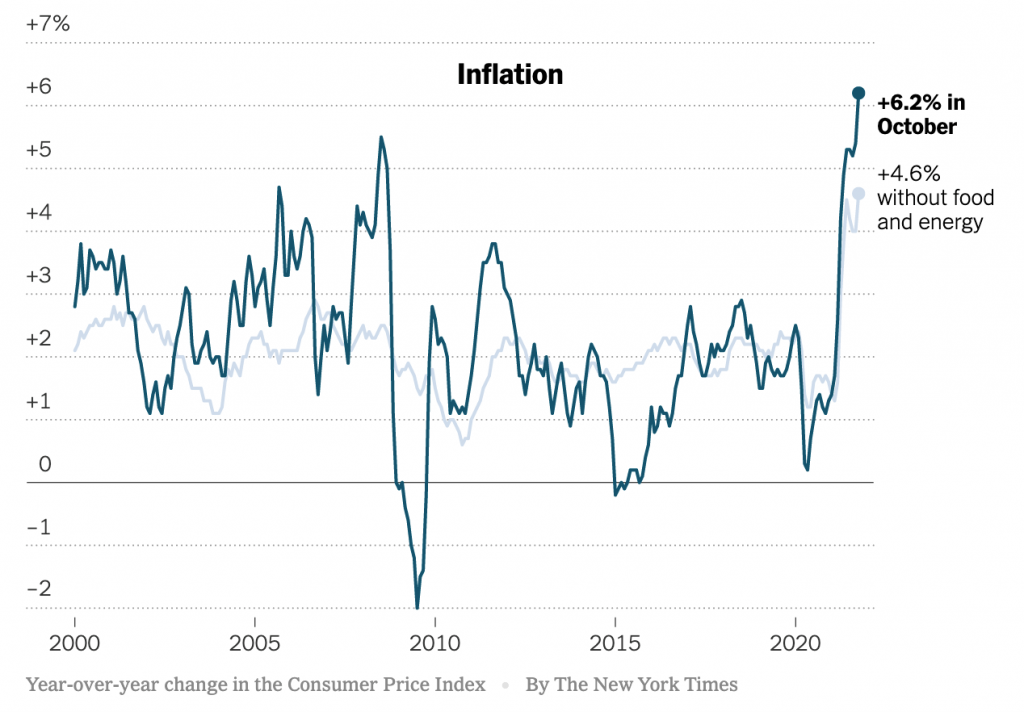 Translating this chart, prices in October 2021 are 6.2% higher than they were in October 2020. The level of inflation that we have witnessed in October has not been seen for a generation, and similar levels have not been felt since the Great Recession. In general, the Federal Reserve (the “Fed”) aims for a 2% annual inflation rate, which is generally seen as a healthy amount of inflation.

Something about it feels unfair: after a global pandemic where so many people have lost their jobs and economies have slowed, shouldn’t things be getting cheaper, not more expensive? Well, the global economy does not operate based on fairness. As Jeanna Smialek from the New York Times points out, current inflation has several leading causes. First, energy and fuel costs have risen throughout the world. The price of Brent crude, which is the global benchmark for oil, has risen 66% since the start of 2021. Simply put, it is getting costlier to heat our homes and fill up our cars’ gas tanks. The price for fuel oil grew by 59% in October, whereas motor fuel grew by 50%. Second, global supply chains have been stressed for months. For example, a global shortage of computer chips has slowed the production of consumer goods like cars and smartphones. Moreover, there were major traffic jams at the world’s biggest ports. This was caused by increased demand for goods coupled with lockdowns of Chinese ports, which in turn slowed shipping and increased related costs. Even relatively simple items, such as home furniture, have been hit hard by these supply chain woes and therefore show the resulting price increase. Third, rent and home prices have continued to grow; this is the long-term by-product of paradigm shifts in homeownership and investment that occurred during the height of the pandemic. Fourth, food prices have also soared, as labour shortages are raising service industry prices, and employees in general are demanding more compensation.

This economic issue is not isolated to the world of finance. At the end of the day, governments are blamed for not being able to control inflation. Whether that blame is fair is an item for debate among economists and policymakers, but the end result is the same. Expect that this inflation issue will be a hot topic in elections throughout the world in the months to come.