They say that hindsight is 2020. Since it is already 2021, we now have the benefit of hindsight when we look back at the year that will forever be associated with COVID. Some companies fell apart. Others flourished. Enough time has passed to start drawing initial conclusions about how the business world has changed since the onset of the COVID crisis. One thing hasn’t changed: companies like Uber are stirring up controversy.

Few companies inspire as much fierce debate as Uber. That’s pretty impressive for a company founded so recently (2009). Its advocates call it “disruptive”, while its detractors call it “destructive”. The company’s express aim has always been to disrupt the taxi industry. For the average consumer, this disruption was a long time coming. Until Uber’s ascent, the taxi industry existed as a series of small monopolies in cities across the world. In many cities, their technology was dated or non-existent, and grabbing a taxi, which is supposed to be convenient, always seemed to be an expensive hassle. Uber’s rise to prominence was a rude awakening for the taxi industry. We now take Uber’s then-innovative features for granted because they have become standard across the industry. But being able to call a taxi at any time to your exact location, watch it make its way towards you, have a digital record of your travels, and pay effortlessly via credit card: these were all game-changers in the early 2010s. The entire industry became drastically more convenient and safe, which led to increased adoption, which in turn led to substantial decreases in alcohol-related accidents.

That said, the company’s detractors have a long list of legitimate grievances. Taxi companies, the existing market players, have led the international charge against Uber. Their most compelling argument comes from a very logical place: depending on the location, taxi drivers are required to pass a series of regulatory hurdles — obtaining licenses, passing background checks, buying specific vehicles and colours, etc. — before legally being able to drive as a taxi. These hurdles are expensive and time-consuming, but they are worthwhile because they allow drivers access to a regulated monopoly. It was not fair to them that Uber drivers could suddenly bypass all of those regulatory hurdles by referring to a “taxi service” as a “ride-sharing service”. Uber’s proponents would argue that just because these regulatory hurdles existed does not mean that they should exist going forward, and there’s a lot of merit to this argument. The other main criticism of Uber has to do with its stance on employment. Uber posits that all of its drivers are independent contractors, and therefore they are not owed the type of protections afforded to typical employees (such as healthcare, insurance, sick days, etc.). This issue is being heavily debated in courtrooms throughout the world, but the key for our purposes is that Uber has led the global ride-sharing charge, and because of that, they are a deeply divisive company.

HOW DID COVID IMPACT UBER?

2020 was painful for the San Francisco-based firm. The number of regular ride bookings in Q2 2020 was down 75% year-over-year. The situation improved considerably during Q3 and Q4, but not enough to make up for the damage done. Across 2020 as a whole, gross bookings for regular rides declined 47%. Why, then, is Uber’s stock doing so well? 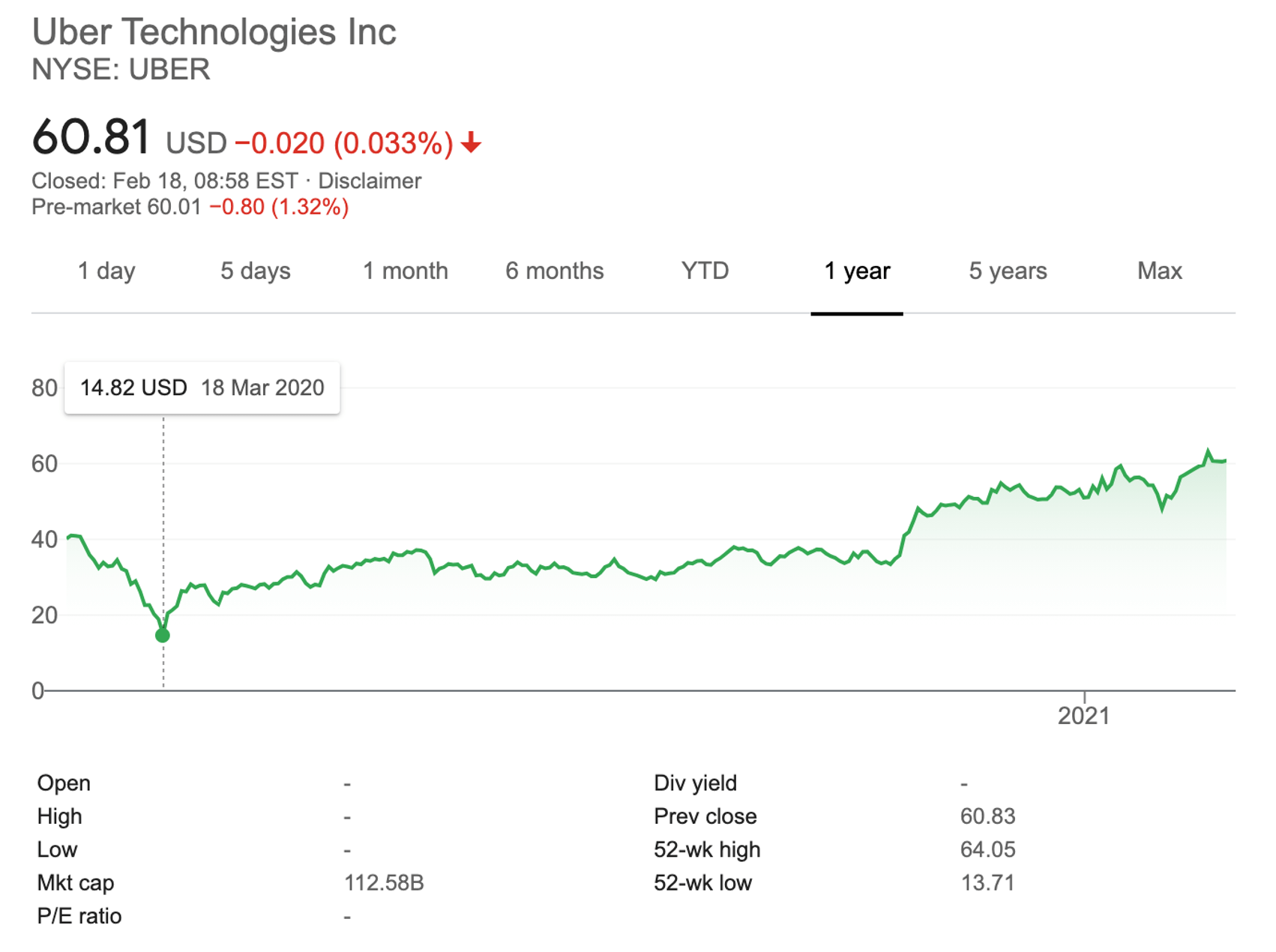 Uber’s stock performance has to do with a few factors. First, investors know that there will be a recovery sooner or later, and Uber is in prime position to take advantage of that recovery. Markets with full re-openings (such as New Zealand and parts of China) have exceeded their pre-pandemic ridership. Second, they are in a prime position in part because they have drastically expanded their other lines of business. Uber does not just offer rides (what the company refers to as “mobility”). Uber also provides delivery services, a market segment that performed exceptionally well during the pandemic. That part of Uber’s business saw considerable growth in 2020, with Delivery Gross Bookings growing 130% year-over-year. While this drastic increase was not enough to offset its mobility losses, Uber could weather the storm.

Companies like Uber provided a much-needed service during the pandemic: temporary employment. Vast numbers of people were suddenly out of work, and they had few options to put food on the table. Although not everybody agrees with Uber’s employment practices, they did act as a sizeable stopgap employment solution in many markets. This may or may not result in some built-up goodwill from governments around the world. If it does exist, they are going to need it: as their CEO once said, Uber’s battle for market entry and market share is a “tale of 10,000 cities”. Everywhere they go, they have a legal, political, and regulatory fight on their hands. So, as vaccines roll out at different paces in cities across the world, Uber will be there, ready to battle.