They say that hindsight is 2020. Since it is already 2021, we now benefit from hindsight when we look back at the year that will forever be associated with COVID. Some companies fell apart. Others flourished. Enough time has passed to start drawing initial conclusions about how the business world has changed since the onset of the COVID crisis. Instead of telling the story of a company that was exceptionally successful, this week we will highlight McDonald’s, a company whose performance was not exactly outstanding, but whose mid-pandemic innovation was impressive nevertheless.

We often kick off these articles by supplying background information about the selected company, but McDonald’s is so, so ubiquitous that doing so feels trite. Instead, we are going to take a deeper dive into company strategy and results. We all know that McDonald’s is a massive global operation, but here are the specifics: the company has locations in over 100 countries, and more than 38,000 restaurants worldwide serve 69 million people every day.

Like any global business, COVID affected some markets worse than others. Moreover, its impacts occurred at different times. You might recall how Europe was mostly open in the summer of 2020, only to close back down harshly come fall? Well, this regulatory back-and-forth drastically impacted the performance of McDonald’s. Outside of the US, McDonald’s relies quite heavily on in-restaurant purchases.

According to the company’s CEO, the three strategic priorities for McDonald’s going forward are delivery, drive-thru, and digital. To survive, initiatives that the company had already set in motion had to be accelerated—rapidly. Take drive-thru: in Q4, drive-thru accounted for nearly 90% of sales, according to Kevin Ozan, the CFO of McDonald’s. That is a stark shift in revenue source, considering “Pre-COVID, nearly 70% of customer orders were in-restaurant”. That is such a massive swing and one that could wipe out a company without proper preparation. Thankfully for the company, they had already been working on how to speed up the drive-thru experience. According to their data, their drive-thru speed had improved by roughly 30 seconds in the past two years in major markets. Had they not made these drastic improvements pre-pandemic, their crisis-time revenues would be significantly worse than they were. They say that luck favours the prepared, and that’s true even when it comes to hamburgers.

As we mentioned in a recent Stage article, Uber’s viability as a company during the pandemic is primarily due to its delivery business. McDonald’s, too, improved drastically in this category. By partnering with UberEats and DoorDash, “McDelivery” became available to more than 10,000 locations across the United States. McDelivery has different business partners depending on the country, but UberEats is the most consistent international partner. Its success in these areas is driven by its ongoing commitment to a better digital experience. Part of that has to do with mobile experiences and promotions, which were a focal point mid-pandemic. On a more practical note, ordering screens inside restaurants enabled a socially distanced in-restaurant experience.

For most industries, COVID was either the best of times or the worst of times. McDonald’s is one of the rare exceptions in that its performance was somewhat mixed. For example, COVID forced the permanent closure of more than 200 US locations. Considering there are 14,000+ locations in the United States, it could have been much, much worse. We can see this mixed, up-and-down performance reflected in the company’s stock. 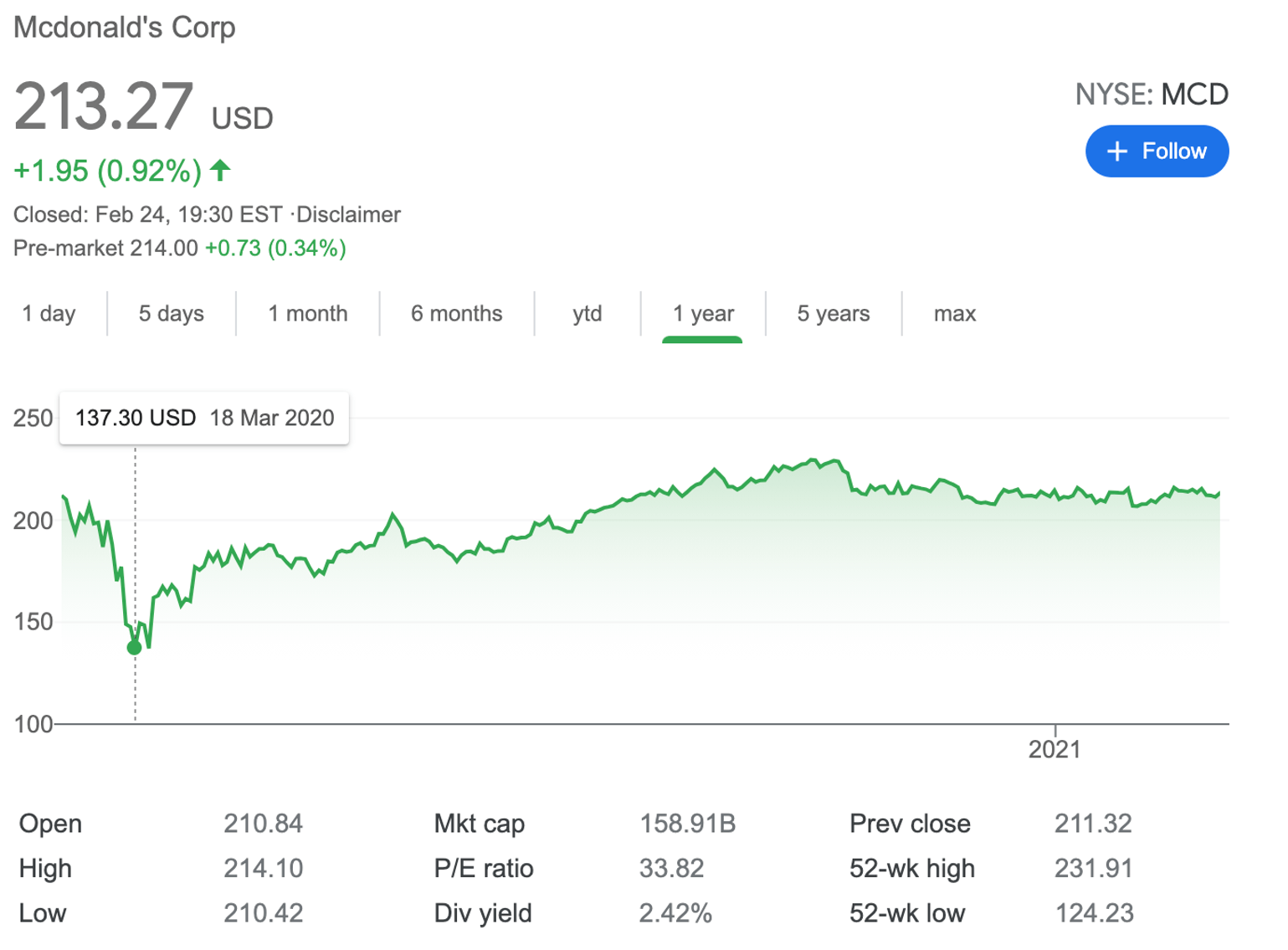 This may be anecdotal, but I have found myself eating far more McDonald’s during the pandemic than I did before. Maybe that had to do with the fact that in 2020, the company spent billions in capital to keep their brand alive in the face of the pandemic. In 2021, the company plans to spend roughly $2.3 billion. Half of this sum will be used to open more than 1,300 new restaurants across the world, including 500 in China. Despite the downturn, the company is doubling down in its bet on its future.

More than a Mall