They say that hindsight is 2020. Since we are at the end of Q1 2021, we now have the benefit of hindsight when we look back at the year that will forever be associated with COVID. Some companies fell apart. Others flourished. Enough time has passed that we can start drawing initial conclusions about how the business world has changed since the onset of the COVID crisis. This analysis covers Live Nation Entertainment, a company that was devastated by COVID lockdowns yet used its resourcefulness to survive, innovate, and set itself up for future success.

As its name suggests, Live Nation Entertainment (“Live Nation”) is all about live events. The company promotes, operates, and manages ticket sales for live events. Its largest market is the United States, but it also has an expanding international presence. The company does not just throw events; it owns and operates venues that host events. The company has only been around since 2010: it is the result of a merger between Live Nation and Ticketmaster, the two best-known entertainment companies in the United States. Ticketmaster was known as the nation’s largest ticketing service. This merger was not without opposition: many in the industry feared that the company would obtain monopoly status, thereby driving prices too high and harming consumers. Over the last decade, they steadily bought up smaller entertainment firms and the rights to certain events and festivals, such as Bonnaroo. Some artists love the company: after all, the company manages certain artists and their careers. Other artists abhor them: they say that Live Nation has too much power and always gives the artists the short end of the stick. On the consumer side of things, criticism often centres around their booking fees, making the customers feel swindled. Despite this criticism, this company has continued to grow and is currently traded on the New York Stock Exchange.

When was the last time you were at a live event? When was the last time that you attended an event with more than one hundred people? When watching films or TV shows, I always feel a sense of shock when I watch a concert or party scene; I am simply not used to seeing multiple people in close quarters at once. Just 14 months ago, I attended an event with over 5,000 people. Since then, I have not attended one with more than ten people. Suffice it to say that I have been completely reconditioned. Many people are like me: former customers of Live Nation who would give anything to be a customer of Live Nation again.

Because of lockdowns, Live Nation took a massive hit. According to their recently released 2020 results, their revenue fell by 84 per cent between 2019 and 2020. Based on that number alone, it is a wonder that their company is still operational after such a hit. But there is more to the story, as evidenced by their stock performance. 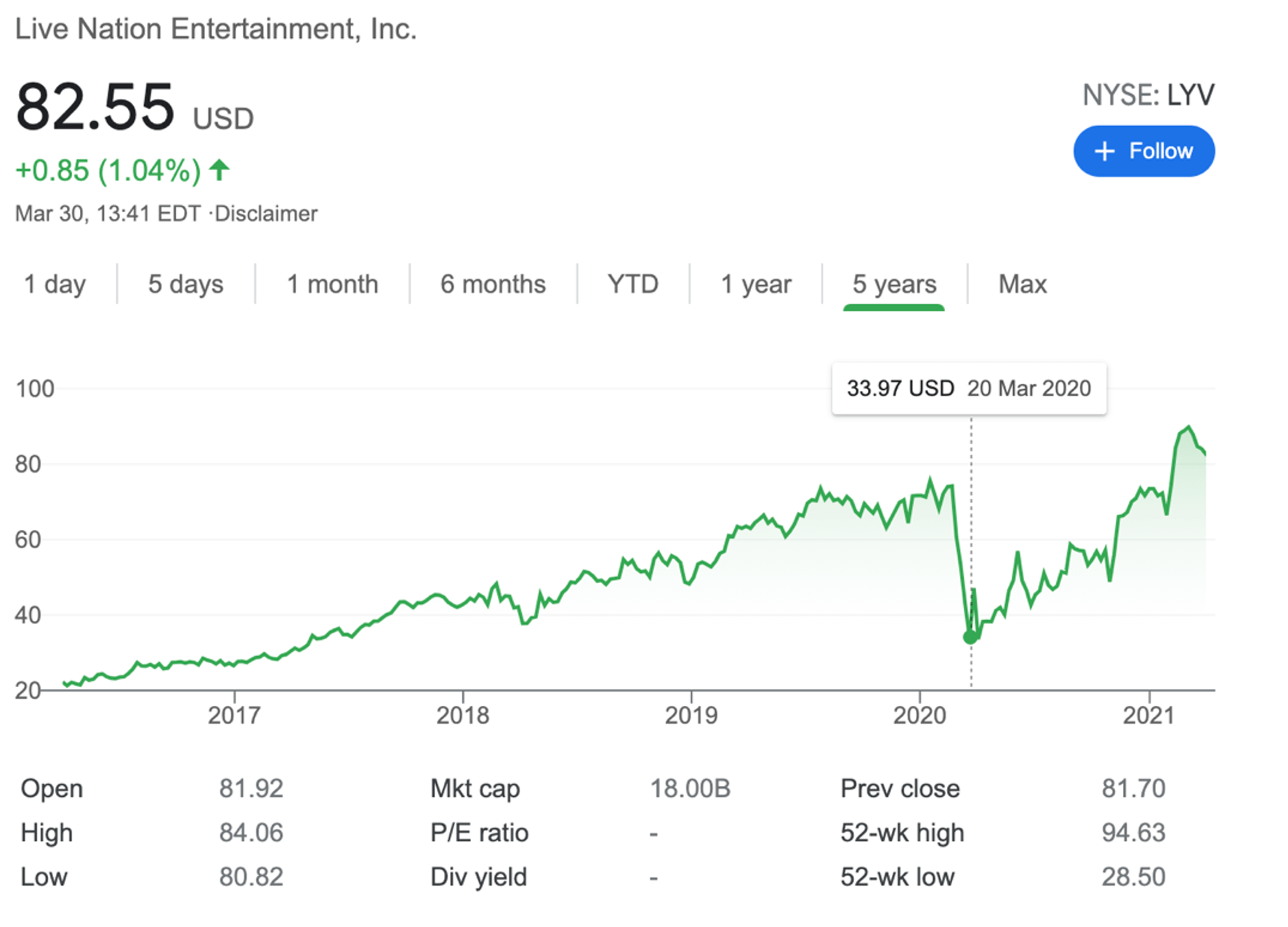 HOW DID THEIR STRATEGY CHANGE DURING COVID?

When there is mass devastation, sometimes that frees companies up to experiment. Live Nation had no choice but to innovate. Despite having to postpone or cancel almost all of its events, the company pivoted successfully into a few new areas. They tried out socially distanced drive-in shows and intimate live-streams (they even acquired a majority stake in a live-stream company in early 2021). This industry shift towards live-streamed events, and their overall acceptability, means that each event now has a significantly larger potential audience. With the potential for virtually unlimited capacity, Live Nation is banking on increased earning potential for each event.

WAS THIS STRATEGIC CHANGE SUCCESSFUL?

Much of Live Nation’s stock market success has to do with pent-up demand. The pandemic, at least in the United States, does seem to be mostly under control. People like myself are champing at the bit to get a vaccine and have a celebratory summer. Large events will be a centrepiece of the worldwide reopening. Only time will tell if the company’s pivots were successful, but the smartest bet-placers in the world are putting a lot of money on the company’s chances for a successful 2021.

Water Polo in Budapest and a Wimbledon marked by absences