This time last year, I was sitting in a hole I had dug in my front yard, wondering aloud whether it was big enough to fit the base of a sizable tree I had bought earlier that day. Last spring, I spent an inordinate amount of time at home improvement stores, and I was not alone. I distinctly remember lines of people wrapping around expansive parking lots, all waiting to get inside despite the strict occupancy limits. Many of those people were like me: they were stuck at home, and they finally had a little bit more time, or a little bit more motivation, to beautify their surroundings. I am fortunate enough to live in a country that has mostly reopened due to a high vaccination rate, but one year later, I found myself digging several more holes for several more trees. This week’s analysis covers Home Depot, the American home improvement giant with an exceptionally strong performance during the COVID Crisis.

Who is The Home Depot?

The Home Depot Inc., known colloquially as Home Depot, is the largest home improvement retailer in the United States. Founded in 1978 in Atlanta, Georgia, Home Depot has become a universal presence in cities across the United States. Its 2,296 stores are massive “big box” retail stores, but what is exceptional about Home Depot in this regard is that its founders designed the Home Depot concept as a big box store. That is, they did not make slow, steady steps towards this model, but instead adopted it right out of the gate. Their rationale is that they wanted to offer a far broader range of products and services than any of their competitors because, at that time, one-stop home improvement shops did not really exist. Its model proved immediately successful: the company went public a mere three years after its founding, which was far less common in the pre-Internet era. The company’s revenue in 2019 was 110.2 billion USD.

How did Home Depot fare during COVID?

Like all companies, Home Depot suffered from the initial closures and resulting market shocks in March of 2020. But by mid-May, the company’s stock reached its pre-crisis levels, and the company’s performance has only improved from there. 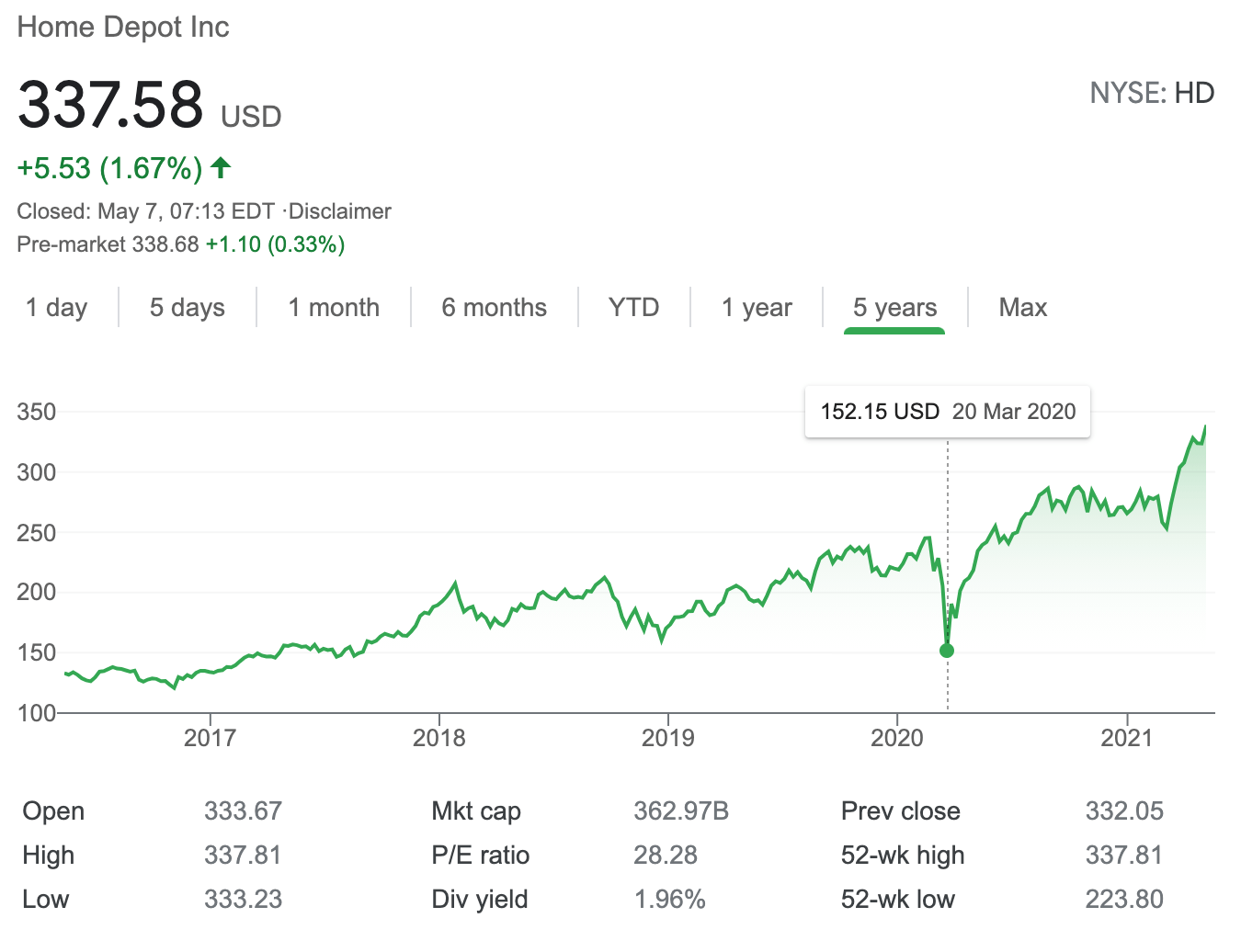 Many company executives dream of their stock performing at pre-crisis levels. Home Depot has not only had excellent stock performance, but the company also achieved record revenue last year. In 2020, the company’s revenue improved to 132.1 billion USD, a 19.9% increase from 2019.

At this point in The Stage articles, we typically delve deeper into strategic changes that companies made to survive or thrive during COVID. It would be easy to say that Home Depot was simply in the right place at the right time, but that would be superficial. In reality, Home Depot made extremely important changes. They drastically expanded curbside pickups. Their digital channels were 100% reliable and scalable to keep up with increased demand. They stood up apps quickly. But according to the company, all of the innovations made by Home Depot during COVID were merely accelerations of a long-term strategy. They say that luck favours the prepared, and Home Depot was not simply in the right place at the right time. Had they not been prepared to handle the digital surge, they would not have had nearly the level of success they achieved in 2020.

I am afraid to do the math, but I am certain that I have spent more on home improvement so far in 2021 than I did in all of 2020. Last year, I found an expensive yet fulfilling habit, and one that I somehow justify with vague assertions about curb appeal and increased home value. But in all honesty, I just enjoy the fact that I have turned my house into a home. As we can see in Home Depot’s 2021 performance thus far, there are many others like me. We are hooked, we have newly acquired confidence in our home improvement skills, and we have the desire to keep investing in our homes. That bodes well for Home Depot’s future.

Keeping up with the Joneses

The minions are back

A YEAR AGO: Selfish Characters on Teams, In Sports