The Great Recession vs The Corona Crash

Parts of the current crisis feel awfully familiar, while other aspects are completely unprecedented. The level of familiarity all depends on where one looks. This series investigates five different industries around the world to show the similarities and differences between the Great Recession and the Corona Crash. While our Corona data is inherently limited, we can still draw conclusions based on Great Recession data about where it may go in the future. This week, we are examining the global oil and gas industry.

Not all oil is created equal. Think of it like water: there is “sweet” oil, which, like freshwater, does not need much refinement before consumption. Likewise, there is “sour” oil, which, like saltwater, contains contaminants that need to be filtered out before consumption. For historical reasons, the standardised price for international oil and gas is called the West Texas Intermediate (WTI), which is oil that meets specific sweetness standards. The WTI price is the single most important indicator for the entire oil and gas industry. No indicator in any other sector yields so much power over so many people. Below is the WTI between 2004 and 2020. 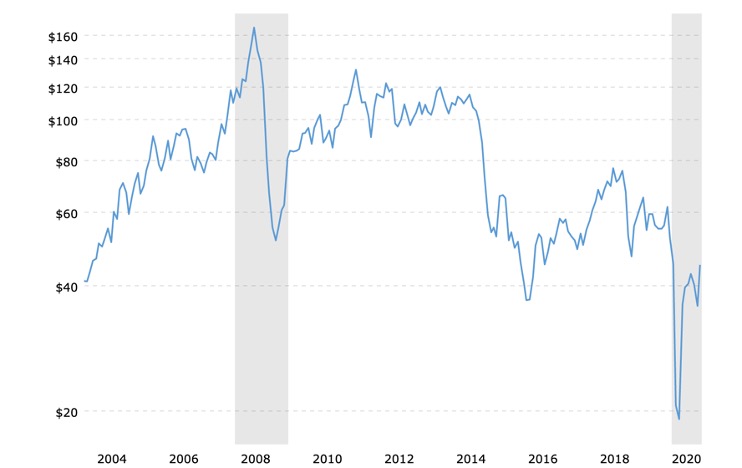 In the years leading up to the Great Recession, an industry known for booms and busts experienced record success. Since the 1980s, the WTI price generally hovered between 30 and 40 USD/barrel. In the mid-2000s, an energy crisis took hold across the world that strained global supply despite increased demand, resulting in meteoric price increases. Like any complex event, this crash had a litany of causes, but the consensus is that the price increases were primarily due to tensions in the Middle East, increased demand from emerging economies like China, a weakened US dollar, declining petroleum reserves, and speculators. No matter the causes, the effect was apparent: within a few short years, the value of a barrel of West Texas crude sat at over 160 USD.

After peaking in July 2008, oil suffered an 80% drop within six months. Although we are now used to such numbers due to COVID, back then, it was difficult to imagine such a steep decline in any industry. The petroleum industry certainly has never been immune to busts — the oil crises in 1973 and 1979 had massive worldwide consequences — but after such a prolonged “peacetime”, this kind of crash had widespread fallout throughout the industry. Despite government attempts to mitigate against, there was widespread global unemployment across the oil and gas sector in the years following the Great Recession. That said, from 2010 onward, the industry seemed to have rebounded reasonably well. The post-recession recovery propelled oil to over 100 USD/barrel.

This post-recession recovery ended up being short-lived. In 2014, the price of oil fell off another cliff. Again, isolating a few reasons for this crash is difficult, but most blame a combination of events. One is the strengthening of the USD, which the Fed began in earnest in 2013; this caused price falls for many commodities, not just oil and gas. Another reason is too much supply in relation to demand. China’s long-term, ever-increasing growth had bolstered global demand, so when demand from China fell, so too did global demand. Moreover, because of increased demand in previous years, countries like the United States and Canada began to extract far more oil using a process known as “fracking”; essentially, this technique allowed companies to cheaply access reserves that they had previously been unable to tap, at least not in economically. For these reasons, even before COVID, WIT never recovered to their pre-2014 heights, which were significantly lower than their pre-Great Recession heights.

In early 2020, WIT fell to levels not seen in over 23 years, which is all the more troubling when adjusted for inflation. After the initial plunge, WTI seems to have stabilised, but like many things COVID, we are living in a new normal. In oil and gas terms, this new normal of 40 USD/barrel is not a kind one. That is because of the nature of oil and gas: when companies invest into drilling for oil, they speculate based on the expected return on investment, and with the price per barrel so low, that means that far fewer reserves are economically viable. Thus, in 2020, the industry has experienced a massive contraction, leading to widespread layoffs throughout the world. This industry is a resilient one known for bouncing back, but we expect COVID to make it hard for it to get back up.

More than a Mall