After the last two years, we have come to terms with the fact that “light at the end of the tunnel” is not a proper metaphor when it comes to discussing a pandemic like COVID. When several companies simultaneously produced vaccines, many thought there was good reason to hope, but Delta and Omicron had other plans. That said, The Economist makes a pretty compelling case that there is reason to be optimistic about macroeconomic trends that will shape the coming months and years.

The Economist points out that many of the world’s most important economic indicators are looking surprisingly strong. For example, the price of crude oil is often a good predictor of a looming recession. When that price drops by 10 USD/barrel, we are in for a rough ride. But on January 18th, Brent crude hit 88 USD/barrel, its highest point since 2015. Similarly, OECD, a think tank, maintains an unofficial yet accurate GDP calculator of the world’s richest 46 countries, and those numbers are looking surprisingly strong. “ GDP across these countries is currently about 2.5% below its pre-pandemic trend (see chart 1). That is a little worse than in November, when GDP was 1.6% below trend, but is still much better than the situation a year ago, when output was nearly 5% below it”. 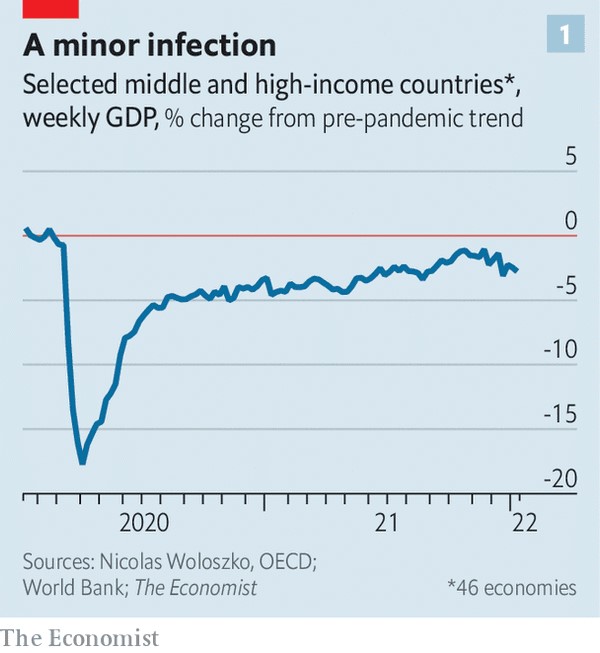 Major economic indicators are looking surprisingly healthy in part because countries are not locking down like they used to. While one’s mind might immediately go to impacts on the hospitality and leisure industries, lockdowns have other less apparent, but far more sinister effects. For example, if a country is a manufacturing or shipping hub, a lockdown in that country can cause severe impediments to the global supply chain. But so far, “manufacturing nodes such as Vietnam and Malaysia… have kept restrictions laxer than they were a few months ago, though case numbers in both places remain relatively low”. UBS actually has an index that ranks lockdowns on a scale from 1 to 10. Despite the pressures of Omicron, the average global lockdown scale has only moved from 3 to 3.5. In fact, every single rich country except for the Netherlands has avoided a proper lockdown.

The effectiveness of the vaccines regarding severe illness, national restraints regarding lockdowns, and the sheer transmissibility yet weaker virulence of the Omicron variant mean that this pandemic tunnel we are all travelling through is decidedly less dark than it was in the last two years. Data shows that people are much more willing to take risks now than they were just months ago. Goldman Sachs maintains an “effective lockdown” index that shows how willing people are to participate in society. So, even if the government is not maintaining a strict lockdown, people might lock themselves down in order to mitigate risk. Despite infection numbers that are much, much higher than peak levels of 2021, people are far more likely to go to the gym, get their hair cut, or see a movie. Part of this is plain fatigue, but another aspect of it is that infection rates are already staggering. Experts estimate that some 5-10% of Americans are currently infected with COVID, and the WHO predicts that half of Europe will be exposed to COVID in the next few weeks. Maybe this was not the end of the tunnel we were expecting, but based on economic data, this rough winter looks like it will lead to a much brighter spring.

A YEAR AGO: The magnet that repels, tolerably