In a typical The Stage article, we turn the spotlights towards a particular company and analyse their recent performance. We take a look at their company history, industry, and COVID’s effects on their performance in the past year. But how in the world can we look at a currency through the same lens? With a typical currency, we simply would not be able to, but with a cryptocurrency (“crypto” for short), the “company story” is a vital part of the currency’s appeal. One of the most interesting stories of the year is the rise and fall and rise and fall of Dogecoin.

Dogecoin is a meme cryptocurrency. If you only understood “is a” in that sentence, you are not alone. The name Dogecoin (pronounced DOHJ-koyn) comes from a popular internet meme from 2013. A “meme” is defined as “an image, video, piece of text, etc., typically humorous in nature, that is copied and spread rapidly by internet users, often with slight variations.” According to knowyourmeme.com, “Doge” is a slang term for “dog” primarily associated with pictures of Shiba Inus and internal monologue captions, usually written in intentionally broken English.

In 2013, software engineers Billy Markus and Jackson Palmer decided to create a cryptocurrency based on the meme, which they affectionally named “Dogecoin”, a spin on Bitcoin, the most prevalent cryptocurrency. A cryptocurrency is “a digital currency in which transactions are verified and records maintained by a decentralised system using cryptography, rather than by a centralised authority”. So, instead of governments owning and manipulating the currency, individuals or teams of individuals can develop their own currencies based upon certain ideologies. For example, some cryptocurrencies champion privacy, which is why they are used for transactions on the dark web. If you think this sounds a little too in the weeds for your taste, consider that five years ago, one bitcoin was worth 595, and it is now worth 26,000 EUR. Moreover, Bitcoin transactions consume roughly 0.55% of global electricity production.

There are many differences between Bitcoin and Dogecoin, but the main one is that Bitcoin is meant to revolutionise how the entire world does banking. In part, it is a product of the widespread distrust of governments and banks following the Great Recession. Dogecoin was started as a joke based on a meme. It was created in less than 3 hours, and much of its source code is incomprehensible. Yet somehow, enough people took the joke and ran with it enough for Dogecoin to amass real value. 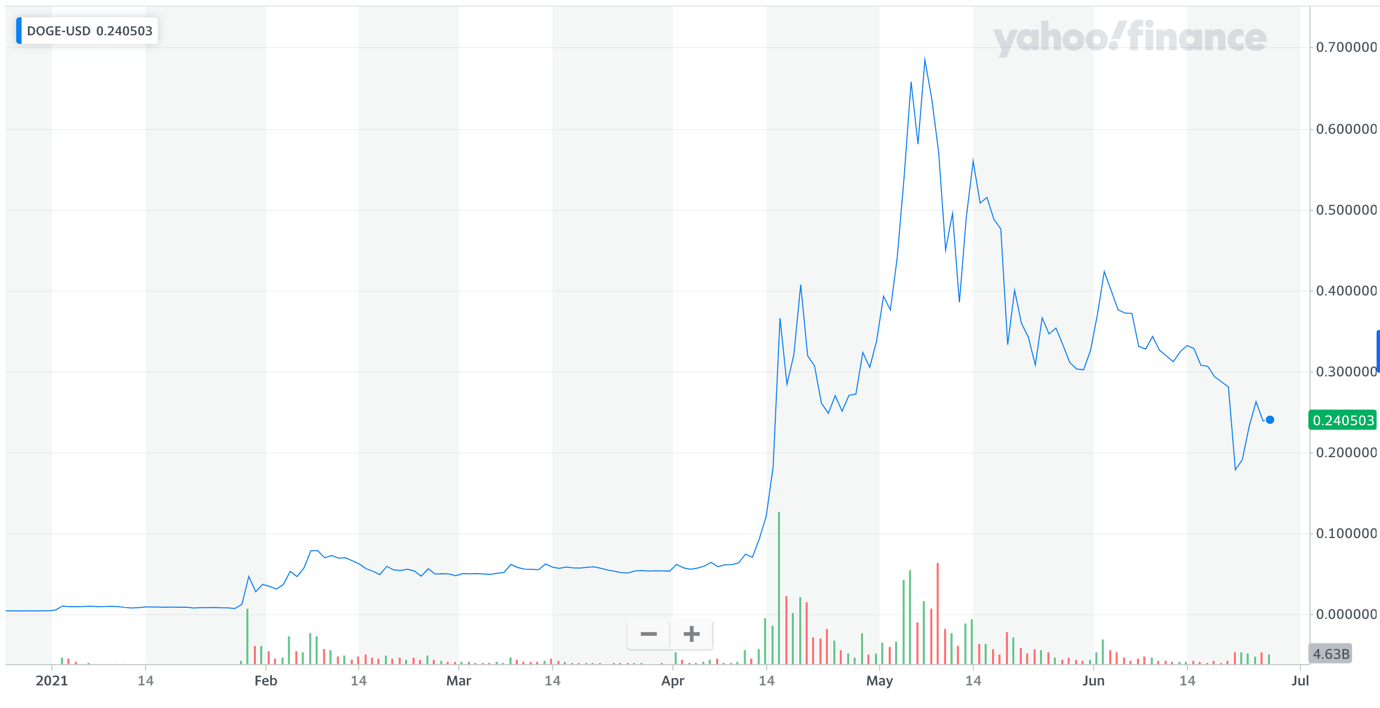 During the peak of the Dogecoin craze, its market cap exceeded 80 billion USD. Now, it is still above 31 billion USD.

Despite its flaws, the internet took the meme currency and ran with it. It became extremely popular on Reddit as a way to send money back and forth. This generated a lot of interest, and eventually, Reddits’ users developed the infrastructure needed to support a full-fledged cryptocurrency. By mid-2021, even Elon Musk hopped on the bandwagon. Almost every large value rise and fall in the graph above (and in the value of Bitcoin) can be attributed to Mr Musk’s tweets supporting Dogecoin (at the expense of Bitcoin). He has even discussed accepting Dogecoin as a viable payment option. We may look back at Dogecoin as a pandemic-era joke that did not survive 2021, but there is a very real chance that this joke currency remains remarkable relevant as our banking system adapts to the crypto craze.