They say that hindsight is 2020. Since we are more than halfway done with 2021, we now have the benefit of hindsight when we look back at the year (and change) that will forever be associated with COVID. Some companies fell apart. Others flourished. Enough time has passed that we can start drawing initial conclusions about how the business world has changed since the onset of the COVID crisis. This week we are taking a look at American Airlines, the largest airline in the United States and a bellwether for the nation’s entire airline industry.

American Airlines (AA) is headquartered in Dallas-Fort Worth. It is not just America’s largest airline, but also the world’s largest airline in terms of fleet size and total passengers carried per year. Before the pandemic, AA averaged more than half a million passengers per day. To move this many people, the company employs more than 130,000 people in more than 50 countries.

The airline industry’s struggles, and those of AA, started well before the pandemic. Below is the company’s stock performance over the last seven years. 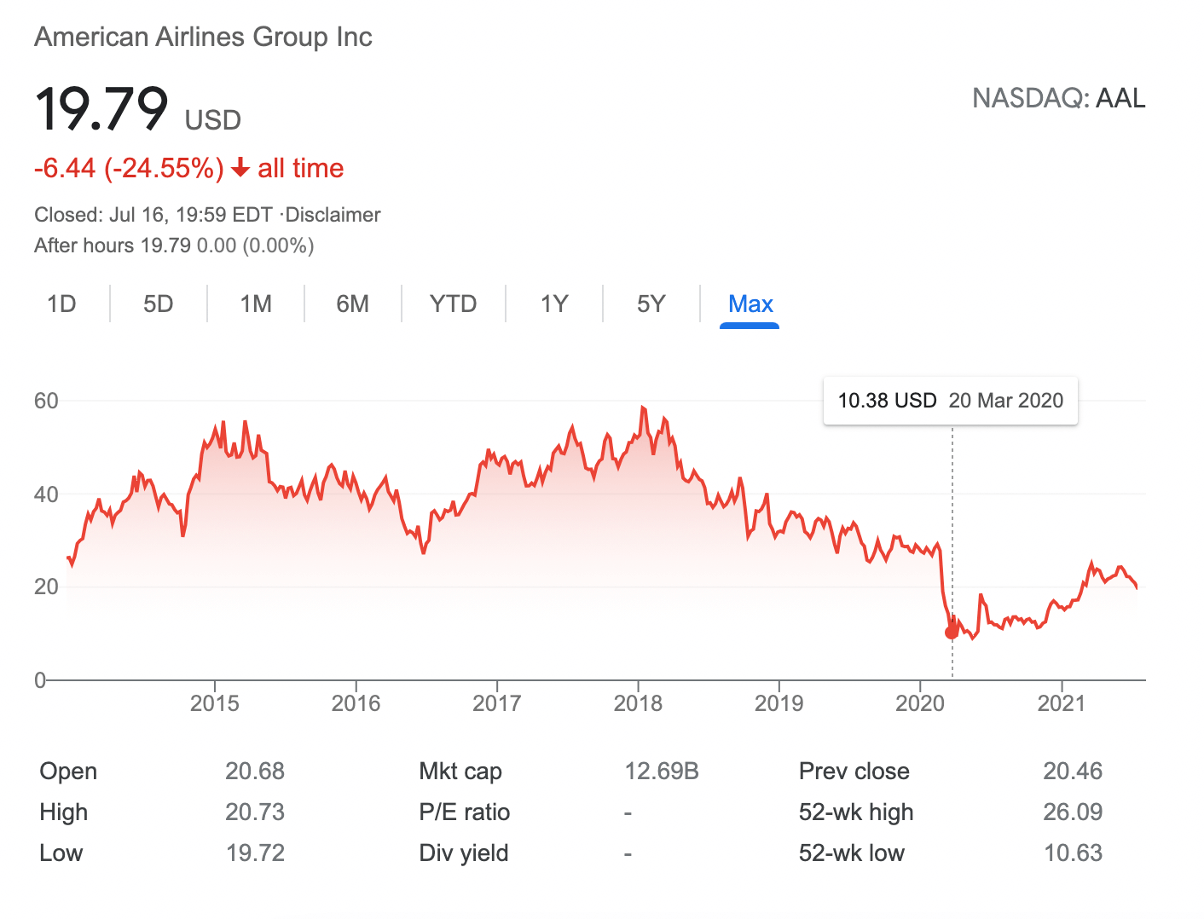 Note that in early 2020, the AA stock price was already at half its 2018 peak. There are too many reasons behind the stock’s performance to list here, but one problem often cited was their heavy debt burden; they are known for carrying a lot of it. When the virus hit, this problem worsened considerably. Nowadays, the company is paying more than a billion dollars per year just to service its debt, and people are questioning whether they will ever be able to pay back any meaningful part of it. Without doing so, the likelihood that they can borrow during any future crisis is low. Given the wariness of investors towards high debt-to-equity ratios, there are many long-term question marks surrounding the company.

Now, investors are openly wondering if AA is a ship that will eventually sink, albeit in the long run.

Fireworks at the end of the tunnel

Despite all the pandemic-related doom and gloom, there are reasons to be hopeful about AA’s prospects. Below are the numbers from the TSA about total travellers compared to travellers during prior years on the same day:

Everybody expected 2021’s numbers to be significantly better than the 2020’s dismal ones, but what is remarkable here is how good 2021’s numbers look compared to 2019’s. On some days, 2021 even outperformed 2019. For comparison’s sake, air traffic in Europe in 2021 is at roughly 50% of its 2019 levels. The Great Recession taught us many lessons, one of those being that the companies that weathered the worst of the storm were able to gain market share as their competition died off. If AA can use the relatively healthy American market to bolster its global positioning, the sky is the limit.

Looking Back at the Great Recession: Part 3

Looking Back at the Great Recession: Part 3